It's a Dual Holiday - Flag Day and the U.S. Army's Birthday 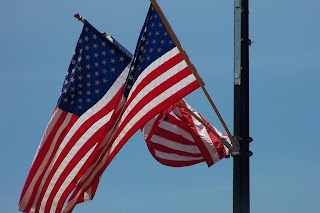 Today is both Flag Day and the 235th birthday of the U.S. Army.

It is believed that Flag Day was first celebrated in 1885.  The tradition continued somewhat informally for years after that and finally in 1893 the Pennsylvania Society of Colonial Dames of America adopted a resolution requesting that everyone fly the flag on that day, June 14.  It was not until 1949 that Truman signed an Act of Congress designating the day as Flag Day.  You can read more history here.

Last year on Flag Day I posted a favorite anecdote from the Leo Thorsness book, Surviving Hell:  A POW's Journey

.  I'm going to re-post it because it's a reminder of how much our flag really means:

Thorsness was captured in 1967 during the Vietnam War;  his cellmate Mike brought them to tears when he scrounged together items to make a flag;

As for the Army, of course, when the Revolutionary War broke out there was no single national army but rather each state had its own militia.  The Continental Congress met in May to solve this problem and created a national army.  On June 14, 1775, Congress approved the national army and the next day named George Washington as commander-in-chief of the Continental Army.  You can read more about the formation of the Army here.

To honor both the Army and our flag, here is the Army Field Band with The Star Spangled Banner - awesome!

Update:  Click on over to Pecan Corner; she's got the first recruiting poster for the Continental Army.  Neat!
Posted by Pat Austin Becker at 12:01 AM

Thanks for the link! I couldn't improve on your wrap up post. The POW story is a powerful testimony to our flag.

As an aside, wow, you are getting prolific with all this free time. We'll get spoiled, then school will start again. There's always more to say than time to say it, eh? :-)

Noted and linked with gratitude:

Great post, Pat. Leo's from my state of South Dakota;
he ran for the Senate here way back.
Just wanted you to know us northerners have everyone along the coast in our prayers...

and love your blogs!