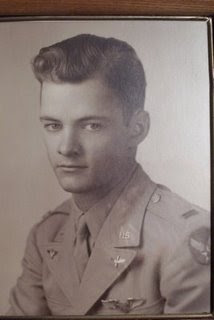 It's Father's Day weekend and I'll be thinking about my Dad tomorrow.  Well, I do all the time anyway, but it's Father's Day so...; he's been gone many years now but it seems like he's still with us.

I never knew what to get daddy on Father's Day.  Mostly I'd just go hang out with him and take some little something.  Dad was in the Army Air Corps during WWII and we were always buying him books on P47s or other WWII related stuff because he loved flying so much.  I have a whole shoe box of his letters he wrote home to his mom during those years; I posted one here a while back.  He loved golf too, and so we gave him books on golf, or written by golfers he liked.

Be nice to your Dad this weekend if you're lucky enough to still have him in your life.  And if he's gone, like mine, honor him anyway with a kind thought, a prayer or just being grateful for his role in your life.


On to the links:

We'll start out with Bride of Rove today.  She's got a round-up going here in which she chastises me for giving Obama ideas about closing down coal mining.  Of course, that was just a rhetorical question I posed yesterday.  He'd never do such a thing because he's got other plans for putting them out of business.  He's already explained that.  The moratorium on deep water drilling is just one way to get there.

Fishersville Mike is back online after some technical problems this week.  I'm glad, because I missed him!

Pundette buries the lede in this post about Obama's goofy trip to Ohio yesterday, then points out he went to a baseball game last night.  So glad he has the leisure time to do that and there are no pressing issues he must attend to, like putting Louisiana out of business.

Little Miss Attila clears up for Peggy Noonan the definition of "unlucky."  No Sheeples Here adds to the debate.

The Other McCain reports another bank shutdown yesterday and says we're on pace for about 170 this year.  That would be an optimistic outlook according to a friend I talked to a while back who works for FDIC; he said they're expecting about 450-500 this year.  Crikey!

Fausta has a really good post on the gulf insanity - with video.

Pirate's Cove has a happy ending to the story about the kid who got in trouble at school about his hat.

Sister Toldjah has an awesome picture of Eric Holder.

Fuzzy Logic has thoughts on this administration's plans to green the entire economy.

A Cop's Watch comments on Jindal, too, and reports on a class he took ... in an abandoned convent!

Bliss has an adorable video to put a smile on your face as you click on out of this post.  Go on, watch it.  It's short.

Okay, that's it for today.  Have a great Father's Day weekend, especially all you dads out there!
Posted by Pat Austin Becker at 9:20 AM

Thanks for the link. Big Government has a great article up on Jindal. He'd held more jobs by the time he was 28, than The Won held in his whole life!

My Dad was in the Army Air Corps too. 8th Air Force, 305th Bombardment Group, 364th Bombardment Squadron stationed in Chelveston England. He was a tailgunner on a B-17. Pops left us two and a half years ago. I sure wish he was here.