Jindal Says Obama Doesn't "Get it." 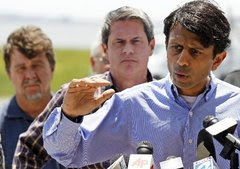 Bobby Jindal says Obama just doesn't get it.  The six month moratorium on deepwater drilling is going to kill Louisiana.

Evidence that Jindal is correct:

So far three rigs are pulling up and moving to foreign waters.  Others are coming:

On Thursday, Shane Guidry of Harvey Gulf International Marine, the primary tug company responsible for moving the rigs, said he has been contacted by two other oil production comapanies, whom he wouldn't name, negotiating with him about moving three rigs to foreign waters.

Operators of supply vessels and dockside workers are suffering.

Industry estimates show about 8,000 people are employed on the 30 rigs affected by the moratorium, while more than 20,000 work in the maritime industry that supports drilling.

That's a lot of jobs.

Obama says the moratorium is no big deal; there are plenty of shallow water rigs to pick up the slack.  Andy Chauvin begs to differ:

"Shallow drilling died in the 80s," he said. "As for the production stuff, I used to work on workover rigs. It's a one-to-two-week thing."

According to the official state drill count, 17 of the 22 deepwater drilling rigs in Louisiana waters pulled up their drills in the first week of the moratorium, which was announced by Obama and Interior Secretary Ken Salazar on May 28 and requires them to plug and abandon their wells at the first safe opportunity.

Governor Jindal made a valid point when speaking to Jonathan Hunt of Fox News; he said that when an airplane crashes, we don't shut down the airline industry.  Similarly, it's a mistake to shut down the energy industry because "one group of bad actors" broke the rules or acted irresponsibly.

Say what you will about Jindal; he's hopping mad about this disaster and he's not consulting experts about whose ass to kick; he's out there doing something about it.  His position now is that if BP isn't going to lead and get this done then they need to get out of the way "so we can take care of it ourselves."
Posted by Pat Austin Becker at 6:24 PM

The clue to Obama is to understand Rev Wright. Then you will get it.

I really don't see the big "shock" to what Obama is doing. He said he was going to "bankrupt" the coal industry. So, why not bankrupt the oil industry along with it.

For those who voted for Obama, How's that change working out for you?