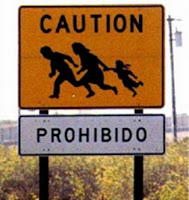 Obama has been taking "time off from the Gulf oil spill," according to The New York Times.  Well, isn't that special?  The oil gushing out of the ocean floor doesn't take any time off, but it's all good.  Obama has delegated responsibility to dozens of czars, chiefs, and other "important people" to handle this worst environmental disaster in recent memory.

What's he been doing instead?  No!  Not golfing!  He's been rallying the Hispanic caucus against Republicans on the issue of immigration.

Caucus members were summoned to The White House for a 45 minute meeting yesterday (that's about 25 minutes more than he scheduled for Tony Hayward) to discuss his plans for immigration reform.  The bill is being written by Chuck Schumer and isn't expected to gain any traction before the midterm elections.

Obama wants the Caucus to shift their ire from his lagging response on immigration to the Republicans who won't promise any votes for it.  Obama apparently reported that Republicans appeared "determined" not to provide any votes, according to The Caucus at The New York Times.

After meeting with Obama, The Caucus blog reports that many members have indeed shifted their ire from Obama to Republicans.

Meanwhile, you have loons like Pete Stark (D-CA) insisting our borders are secure.

In Arizona, even John McCain is backing off of immigration reform somewhat as he faces anti-illegal-immigration candidate J.D. Hayworth in the August primary.

Polls have shown broad support for Arizona's tough stance on immigration and this is certain to be a hot issue in the fall elections, especially with Team Obama ginning up partisan division rather than trying to find a bi-partisan answer.
Posted by Pat Austin Becker at 7:34 PM