How Do You Hide an Oil Spill? 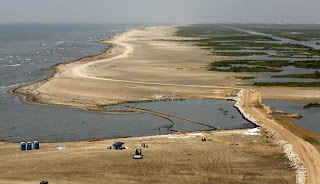 Is anyone surprised that BP is restricting coverage of the oil spill?  It's a PR nightmare.  Have you checked their shares lately?  Their stock dropped 16% Wednesday alone.  BP is scrambling to cover their losses, claiming that the drop in share price "is not justified by the spill."  Yeah, right.

So, no, it doesn't surprise me that they're restricting cameras and media in the area because they don't want anymore pictures of dead animals out there.  The ones from AP photographer Charlie Riedel last week were shocking.

I wrote about the media blackout a bit yesterday in the Blue Seals story - the Seals group wants to document the devastation to the wildlife and estuaries but BP restricted a good bit of their access.  There are still places where the Seals group can go, however.  And they are doing some filming.  Those short clips are being posted to their website.

BP explains it this way:

“Our general approach throughout this response, which is controlled by the Unified Command and is the largest ever to an oil spill,” said David H. Nicholas, a BP spokesman, “has been to allow as much access as possible to media and other parties without compromising the work we are engaged on or the safety of those to whom we give access.”

I'm not an expert by any means so can someone explain to me how flying over the oil spill (which is HUGE) would compromise BP's work?  I understand you can't have planes flying willy nilly up there, running into each other, but this is a vast territory we're talking about.

Not only can you NOT fly over the spill, you can't even go to the public beach and photograph anything:

In a separate incident last week, a reporter and photographer from The Daily News of New York were told by a BP contractor they could not access a public beach on Grand Isle, La., one of the areas most heavily affected by the oil spill. The contractor summoned a local sheriff, who then told the reporter, Matthew Lysiak, that news media had to fill out paperwork and then be escorted by a BP official to get access to the beach.

BP did not respond to requests for comment about the incident.

"For the police to tell me I needed to sign paperwork with BP to go to a public beach?" Mr. Lysiak said. "It's just irrational."

I suppose the theory is that it would hamper cleanup efforts or that the oil sludge is toxic and would be a health hazard.   I'm guessing the "paperwork" would be a disclaimer and would protect BP from a lawsuit should the photographer come down with major health issues because of the oil.  But, still...

What it comes down to is that both BP and the government are in collusion to cover up the real mess.  "The most transparent" President evah!, who wants to "kick ass" and has his boot on the throat of BP should open this all up and let the public really see what is happening down there, "Unified Command" be damned.  That just means cover up these days.

Enough with the smoke and mirrors.

(Photo credit: Andrew Boyd, The Times-Picayune)
Posted by Pat Austin Becker at 9:09 AM

I spent 35 years as a newspaper (i.e. real) journalist and this makes my blood boil.

It's our beach. Those shores belong to the people of Louisiana, Mississippi, Alabama, and Florida. I don't recall seeing a BP ownership sign anywhere nor do I recall needing to have permission from the feds to take pictures of public places. The Land of the Free is under siege now. I say we all storm the gulf and start snapping photos and recording everything or else this will be another rewrite left to the powers that be and our children will be none the wiser.

I'm from the Denver area, but grew up on Grand Isle and in the Larose & Cut Off areas when I was a child in the early to mid 80s. So, even though I am far away from this horrible mess, I hurt.

I cannot believe how it seems as if everyone wants it to seem as if they (BP & the govt) are trying to fixing things, but hearing locals and "guerilla reporters" say things are just the opposite!!! WHAT IS GOING ON DOWN THERE????

Case in point- I've already decided to come to the area to help, but cannot come until September. However, I don't see this going away, and if storms come through, it will be that much worse. So, I did the responsible thing and looked for volunteer opps around Grand Isle and nearby barrier islands. No pay, just volunteer time. I googled and came across a few LA agencies, but one of them said that since this is now a situation with the feds involved, all volunteers MUST go through BP. Why is that? Because every volunteer must be trained by BP. I had to call the BP hotline. The thing is, I don't want to help BP, I want to help the people and the animals. It also said that they don't even need volunteers, that they have enough. How can there be enough? From the pictures and footage I've seen, and from what I hear from those living in LA, there isn't enough help!

I keep hearing on the news that the Grand Isle rental houses are empty, but when I went to a couple of sites, it said on there that they were being used for BP. How can I help by spending money in the community if everything is being used by BP? In order to do anything, I'll need to stay in New Orleans or somewhere else in order to stay, money I'd rather spend in the coastal communities that are being severely impacted.

Anyway, I'm still going to try to help and, worst case scenario, I'll just get to see it with my own eyes.

I don't live there anymore, but even from here, something seems messed up with this.

God bless all of you down there. People outside of this mess REALLY JUST DON'T GET IT. I can't believe some of the nasty comments I've see on other sites in response to this. Just know, others are keeping you in their thoughts and prayers.

@Melissa
Thanks so much for your comment; I'm going to look into some of what you posted. I had no idea about BP taking over the rentals down there. I have heard about the difficulties for volunteers getting on board. I read where they have to go through HazMat training and so on before being able to work.

I came across a story on CNN today where the BP contractors on cleanup duty are just trampling over brown pelican nesting areas. One of the parish presidents down there came across several crushed nests, eggs, and chicks and has now begun working with those crews and the Humane Society to raise awareness of those nesting areas.

But, you're right about one thing. Most folks, as much as they want to, just don't understand how it is there. It's a different world and a different way of life and so many of those people down there will never live the same kind of life they had 60 days ago.

After that "speech" last night CNN has a focus group of just south La. people; they were despondent, angry and heartbroken. Worse, they were without hope.