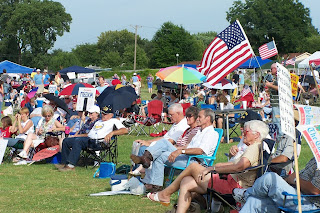 If you live in my neck of the woods be sure to mark your calendar for July 3 as the Red River Tea Party puts on its now annual picnic on the lawn outside the Bossier Civic Center.

The program kicks off at 10:00 a.m. and runs until about 11:30 with music and picnic following.  I'm excited because the line-up this year is awesome:  Louisiana radio personality Moon Griffon will be there and C.L. Bryant will be making a return engagement.  If you've never heard C.L. Bryant, do yourself a favor and watch this from his speech at the March on Washington last September:

I first heard him at the first Shreveport/Bossier Tea Party event in April of 2009.  Bryant just appeared at that event, not scheduled to speak or known to the organizers.  After Board Member Royal Alexander visited with him for a bit, he pulled Bryant on stage.  Thank goodness he did.  You can watch that equally rousing speech here.  I don't know if Sharon McCullar is speaking again this year or not, but I hope so.  She moved me to tears with her speech in April of this year; at about 3:55 in this video when she starts talking about her two Marine sons, I lost it.

There will be vendors at the event this year to include pizza, hamburgers, hot dogs and sno cones.

Make your plans to bring the family and come celebrate the Fourth and have a good time!
Posted by Pat Austin Becker at 9:06 AM