And So it Begins...Insurance Providers Closing Shop 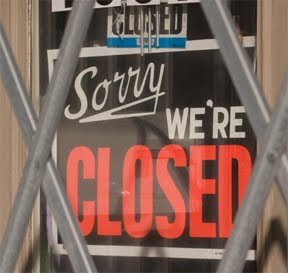 Why?  Because of Obamacare; the American National Insurance Company and its subsidiaries have concluded that their plans for individuals will not meet the requirements of Obamacare.  They will continue to provide large group coverage.

But wait!  Obama told us "If you like your health care plan, you can keep your health care plan." But where's the part where he told us about insurance companies not writing new policies, making it harder for you to buy one and limiting your choices?  Where's the part when he explained about insurance companies going out of business and laying off workers because they can't meet the requirements of Obamacare? What about the free market?

This is part of what fueled anger at those town halls that Democrats are now avoiding;  the average American understood that the requirements, mandates, and massive bureaucracies that comprise Obamacare are simply unsustainable for many insurance companies.  There is no way they'll be able to maintain when they must cover, for example, someone who never bought insurance until say ... age 45 when they were diagnosed with a crippling illness requiring expensive hospitalization and treatment.

The analogy has been made of someone buying a homeowners policy after their house caught fire.

Another company, nHealth, is leaving the insurance market altogether:

“The uncertainties in the regulatory climate coupled with new demands imposed by national health care reforms have made it challenging to sustain the level of sales required to remain viable over the long run,” [Executive V.P.] Slabaugh wrote.

nHealth began operation in 2008 out of Virginia.  In an interview with Politico, nHealth's CEO, Paul Kitchen, explained:

The health reform law requires insurance companies to spend a certain amount of premium dollars on medical costs and, in many cases, bans lifetime limits on medical coverage. Kitchen said he was uncertain whether nHealth would be able to comply.


“The rules changed in the middle of the game,” Kitchen said. “We’re not willing to wander into that environment.”

And so too will many others.
In related news, there's a new website which will help keep up with the unfolding of Obamacare and the resulting fallout, ObamaCare Watch.
Meanwhile, the federal government is now planning to shell out $125 million for their campaign to convince you to support Obamacare.  This campaign will be headed by, who else, Tom Daschle and Victoria Kennedy.  The $125 million will come from donations from unions, foundations and corporations.
Probably none of that money is coming from nHealth or American National Insurance.

Update:  In a related post, see this from Hot Air in which Ed Morrissey reports that "as many as a million low-income workers currently covered under “mini-med” health plans will find themselves with no coverage at all, thanks to a ban on hard-cap plans offered at low cost."

The law imposes the penalties for mini-med plans in three months, but the exchanges won’t start until 2014. That means more than three years of having no insurance at all for low-income workers who previously had it, even if Obama and Pelosi sniffed at the worth of the plans.

Yep.  You've got to pass the bill to find out what is in it.
Posted by Pat Austin Becker at 9:38 AM