Shreveport Police Lose One of Their Own 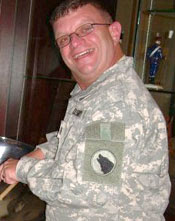 Sad news today:  Sgt. Greg Washam, a veteran Shreveport police officer, has died after emergency surgery related to a cerebral hemorrhage he suffered last week.  He'd been on the force for 20 years.  He was also in the United States Army Reserves where he reached the rank of Lt. Col.

In a eulogy posted by friend and co-worker, Shreveport Police Cpl. R.T. Edwards writes, "Lieutenant Colonel Greg Washam: Greg has fought this last battle with all his heart, giving no quarter, but today he received the order to withdraw. Greg ignored the order refusing to give up his position until the very last minute. On the 20th day of June in the year 2010; LtCol GD Washam broke camp and withdrew to his final position. He has rallied with those who fell before him, he is in very good company. "All the way Sir!" He will be missed but never forgotten."

There's been a trust fund set up to help the family.  Go here.
Posted by Pat Austin Becker at 9:49 AM

What a great guy. He and I were roommates in college at NLU. I always appreciated his faithful service to our country. Always had a smile on his face.

I had the pleasure of serving with Greg in the 4013th US Army Garrison Support Unit and at Ft Polk when the unit was called up for active duty.
When we first introduced ourselves to one another we found out that we were also police officers but from different sides of the river. We enjoyed swapping stories. I could tell he truly loved being a cop, and he loved serving his country. He was one of the good guys.
To LTC Greg Washam, "HOOAH!"