Sam Adams in Danger and It's All My Fault! 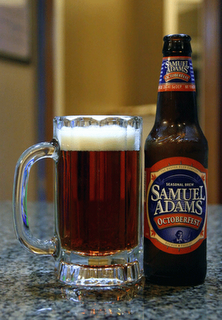 I'm sorry...it's all my fault.  The Boston Beer Company, AKA Sam Adams, is in danger of losing its "craft beer" or "artisan beer" status because their sales will top the 2 million barrel threshold for craft beers next year.  It's all my fault.  I did it.  I should not have stocked my dining room to the ceiling with Octoberfest.

But its okay.  They'll still be making the same great quality product, just charging more for it.  When brewers lose that "small brewer" status they pay more taxes.  InvestorPlace offers some hope, however:

Help could be on the way in the form of a bill introduced last month to the U.S. Senate, increasing yearly production limits to 6 million barrels. The bill would also cut the excise tax rate for small brewers to $3.50 per barrel from $7 for the first 60,000 barrels produced and to $16 from $18 for each additional barrel, according to The New York Times. But with so many more weighty issues at hand in Congress, it’s hard to imagine that the beer bill will get priority any time soon.

I can't imagine what could be a "more weighty issue" for Congress than beer.  I mean, how else are we to cope with oil spills, Obamacare and encroaching socialism?
Posted by Pat Austin Becker at 6:11 PM