I At Least Agree With the "Absurd" Part 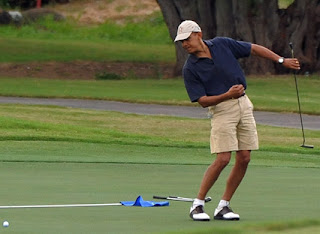 I'm trying to read Politico's lead story today but I have to stop and bang my head against the wall every now and then.  About the only thing I agree with so far is the title; in referring to Obama's presidency, the article is "Theater of the Absurd."  That much, I get, sort of.  More on that label in a moment.

I had this conversation with my mother just yesterday.  She lamented the fact that "all the news is bad."  She said every time she picks up the newspaper there's nothing but bad news in it at every turn.  Then she said, "I think most people are starting to see that Obama was just a mistake, that he's not qualified to do the job."

I disagreed with her.  I think the same people that thought he was unqualified in the beginning are even more convinced of that now, but many of the die hard Hope 'n Changers still believe in him and think he's doing great.  I've talked to them and I see their comments in various social media.  They love him.  They think he's saving the world.

Back to Politico.  This article is such a fawning love fest that you'd think it was in The New York Times.  Written by Mike Allen and Glenn Thrush, the thesis seems to be that Obama's presidency has been rocked by more absurd, unexpected catastrophes than is fair to expect and he's responded with aplomb, dealing with each skillfully and accomplishing splendid major legislation along the way, such as financial reform, health care, and soon, cap and trade.

Don't you just love this line:

"But privately, Obama advisers talk of being prisoners to uncontrollable events and deeply uncertain about how all of this will play out."

Seriously?  "Prisoners to uncontrollable events"?  Which president ever got the luxury of avoiding that one?

And another head banging moment - Rahm Emanuel praising Obama for saving the day:

“If you take a wide-lens view of the domestic and international accomplishments, he has brought America back,” Emanuel said. “We have righted the ship on the crises we inherited, and laid a new foundation for long-term economic competitiveness.”

"Brought America back"?  From what?  Prosperity?  Democracy?  Hauling out that old "inherited" meme again, they've "righted the ship," he says.  If he'd take off those rose colored glasses and look ahead at the coming crisis brought on by Obamacare his opinion might be more reality based.  There's no getting around the reality that Obamacare is going to force people out of their current insurance policies, ration medical care, and raise premium costs, just for openers.
One more head banging moment, if you can stand it:

Yet, the landscape remains befuddling: an angry country, a stubborn economy, and a pair of wars where victory can’t be defined, perhaps much less achieved.

First this "angry country" comment.  Why is the country "angry" if the savior Obama has "righted the ship" and saved the day?  What's to be angry about?

But what galls me is the insinuation that victory in Afghanistan or Iraq can't be achieved.  Have Thrush and Allen not seen the success in Iraq?  You've got to love that support for the troops, don't you?  They've all but said in this piece that our troops are fighting for nothing.

Thrush and Allen point out that the White House is pleased with the progress and accomplishments of the Obama presidency:


Nonetheless, West Wing officials are feeling very good about how the BP and McChrystal crises turned out -– and believe that their response may help the president pivot to the offensive. In each case, Obama did little second-guessing and acted decisively, according to participants in presidential meetings.

There is debate in some circles as to whether McChrystal should have been fired or not; some think he should have been retained.  And as far as the BP crises, I don't know anybody who is happy with that outcome; in fact, flash to the White House, but it's still ongoing.  Oil is still gushing, the Jones Act is still in place, beaches are closing and tourism is over for the year, at least.  Thousands of Louisianians are out of work because of the closed fishing areas and the moratorium.  And lots of folks agree with Joe Barton that the $20 billion shakedown is just that - a shakedown.  It is unconstitutional to confiscate a private company's assets.  Period.
In fact, Thrush and Allen report that the White House was jubilant when Barton offered that apology to Tony Hayward, sending Team Obama back "into campaign mode" to "push back" on Republicans.  Some would suggest that Team Obama has been "in campaign mode" ever since Obama was elected; they've never left it.  All Obama does is campaign.
No, about the only thing Thrush and Allen accurately state in this piece is the title.  Obama's presidency has indeed been absurd.  Indeed, in its literal meaning, the theater of the absurd is of a man threatened or controlled by outside forces.  True presidents and leaders harness those threats and use them to their advantage.  They grasp them and they lead.  They are not buffeted about by these complications.  They act, not react.   Obama stumbles through, making gaffes and getting petulant when things don't go his way.
Most plays in the "theater of the absurd" are trajicomedies and so far, there is nothing funny about Obama's presidency.
What is actually absurd is what Obama is doing to this country.
Posted by Pat Austin Becker at 9:34 AM

Nice caddy shorts you have there Obama. Where is your bag, and who are you caddying for? You do know, don't you?

barack hussein obama needs to be neutered in November and voted from office two years later - and he can take his scumbag toadies with him when he goes.