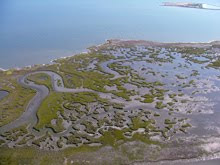 Not only has the Coast Guard stymied cleanup efforts by idling those oil sucking barges for 24 hours while they checked for life vests and fire extinguishers, now the Corps of Engineers is holding up works on rock jetties in five passes to Barataria Bay.  Approval to build the jetties has not yet been issued according to The Advocate:

Gov. Bobby Jindal, in an afternoon news conference Thursday, urged faster action on the rock jetty proposal.  The Coast Guard and BP had previously approved the construction of two of the five rock jetties proposed to help close passes that lead into the Barataria Basin northeast of Grand Isle, Jindal said.

The rock jetties would help narrow the passes around Grand Isle by 70 to 80 percent, the governor said.  The state and the parish are waiting on corps permits to start the work, but Jindal said the mayor of Grand Isle, David Camardelle, has said he’ll start mobilizing for the work with or without the permits.

Jefferson Parish made a formal request to the corps June 7 for emergency authorization to install the rock jetties, which would rise 4 feet above the water in the five passes.

The request was made June 7; that's almost two weeks ago.  You know how much oil is seeping into those marshes in that time?

Honestly, if the government was actually trying to slow down this recovery effort, I'm not sure what they'd be doing differently.
Posted by Pat Austin Becker at 9:05 AM

We need to stop asking for permission and start doing what we need to do to protect ourselves. Period.