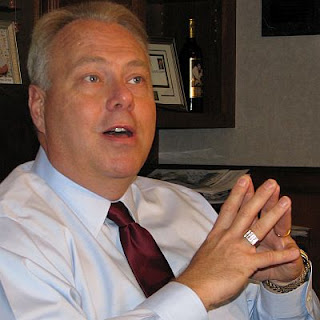 Former Florida GOP chairman Jim Greer has been arrested at his Florida home.    The Washington Post reports that bail has been set at $105,000.

As of right now the charges are unknown but the Florida Department of Law Enforcement will hold a news conference within the hour to announce a "major arrest."

This could foster some backlash on "lonely guy" Charlie Crist who handpicked Greer to head the Florida GOP and stood by him as party activists demanded his resignation after reports of lavish and excessive spending.

Check back for updates.

Update:  While we're waiting on that news conference, little quick back story on Greer:  You will remember he was dumped in January under increasing pressure and investigation of his lavish spending.  The Orlando Sentinel posted an article in April that described lavish parties at his home.  A criminal investigation was launched against him which concerned "a secret contract that put a portion of major party contributions into his pocket."

As for Crist, the Sentinel reports that Greer was a '"top-tier" fundraiser for Crist in 2005 and 2006. Exactly how much he raised from others is unclear, but he, his wife, mother and companies donated $8,000."  The Sentinel describes some of Greer's excess:

By then, he had developed a taste for expensive things. His $465,000 home, finished in early 2006, is a showplace: 3,700 square feet, with a wine cellar, swimming pool and a two-story entry that features a sweeping, curved staircase and chandelier. He also owns two others: a $240,000 condo and $125,000 town house, both at the beach in Brevard County. He bought a plane, although he's not a pilot. His children — three live with him and his wife — had a live-in nanny. He drives a black Mercedes-Benz, his wife a white Lincoln Navigator.

There's more at the link.

Again, at this point, however, we don't know why he's been arrested.

Update 2:  Greer is indicted with six felony counts, including fraud and money laundering and four counts of grand theft centering on his Victory Strategies LLC corporation.

Now a Memeorandum thread is up.

Update 3:  The official press releases will be coming out now that the press conference is over, but it was confirmed that Greer's bond has been set at $105,000.  The charges focus on Greer's Victory Strategies contract with the Florida GOP.  The corporation was set up to allow Greer to serve as a "vendor" with Victory Strategies thus enabling him to write checks to himself from the donations that came in.  "Mr. Greer used the money for his own personal lifestyle."

When asked about potential prison time, it was explained that each of the six charges is a felony count.  Three are third degree felonies which carry a potential five years each in prison.  The two first degree felony counts carry a maximum of thirty years each.

Greer was arrested without incident at his home around 9:15;  Governor Crist was informed around 9 a.m. that the arrest would take place.  No other charges are expected at this time.

Gov. Charlie Crist didn't have a lot to say about the arrest of Jim Greer when asked this morning at a press conference dealing with the Gulf of Mexico oil spill.

Crist, answering a question from the Times/Herald, said he was "disappointed" by the news.
"I have faith in our judicial system," Crist said. "I know they will handle it appropriately."  A second question seemed to center around whether Crist felt responsible for Greer's actions as head of the Republican Party of Florida. Crist answered: "I do not feel complicit."

Later Crist said the news would not affect his Senate candidacy: "As I said earlier, it's disappointing, it's surprising. Sometimes you're disappointed by people."

Well it is about time! Greer and Charlie are joined at the hip. This isn't going to reflect well on Crispy.

Florida is apparently a hotbed of greed and theft. I'm still concerned about Rubio's spending and not satisfied with his account of the personal charges, but he's a million times better than Crist, that's for sure. It would just be nice, for once, to have someone run whom I can support because they're good, not "better than" some other thief and liar.

This will just keep getting more interesting. Though frankly I wish ethical crap wouldn't happen to Republicans this year. Oh, well.

Why is it the F.B.I has not arrested Charlie Crist for his Pattern of Racketeering RICO Acts of robbing David Bryne Copyright Trade Secrets Road to Nowhere robbing 30 billion from the teachers pension fund by insider trading while pretending to perform his duty of safeguarding it helping Harry Sargeant to rob 1.4 billion from the federal government in a oil scheme helping Scott Rothstein to rob over 1 billion helping Alaa Al Ali his terrorist group to blow up the bp oil rig helping Mel Martinez to rob money mail fraud wire fraud why has Charlie Crist not been removed from office everything he does is for Charlie Crist self profit
and to injure destroy Florida the Citizens of Florida is he paying off the F.B.I this is a sick soap opera Charlie Crists crimes are well documented he is a gay pretender out to destroy the world the State of Florida the United States