Lack of Leadership and a Cabinet of Fools 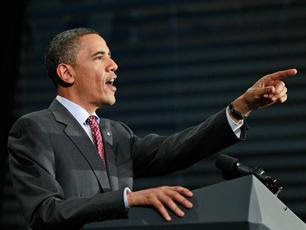 Every day brings a new faux pas, disaster, crisis or general bungling from this administration.  It's not just Obama that seems inept, it's also the comedy team he has installed around him.  The overall impression emanating from this White House is one of a bunch of high school student council kids unsure about how to respond or what to do.

"I need to check on that before I respond."

"I don't have an answer for that at this time."

"I haven't spoken to him on that matter."

That's Robert Gibbs giving the daily briefing.  More often than not he presents himself as a clueless front man covering for the Big Man Behind the Curtain.

If it's not Gibbs inviting scorn it's Rahm Emanuel strong arming his way through the day dangling job offers, "incentives" or inviting suspicion of corruption.

Michelle Malkin was dead on when she titled her book Culture of Corruption.

In his opinion piece at Politico today, Keith Koffler begs to differ with Maureen Dowd who wrote, "It's impossible not to feel sorry for President Obama."  Koffler says, "Well, it's possible."

I don't feel sorry for Obama.  Obama is in meltdown mode and it's getting worse every single day.  Every day either he or his cabinet of fools brings some new offense fuel our scorn.

Koffler calls it a colossal failure of leadership and makes the case that however cerebral or intelligent Obama is reported to be, he is no natural and true leader.  Period.

Obama’s failure to convey any hint of genuine emotion, to rouse the American people to turn their hearts toward the Gulf and to assure them that their world — still built on the plentiful supply of fossil fuels — is not falling apart, is a profound failure of leadership.

Indeed, I've been temped to imagine (it's folly, I know) how Bush would handle the Gulf crisis, or even Clinton.  Hell, even Jimmy Carter.  The "bloodless" response from Obama is just galling.
Obama's supporters, and even Gibbs, try to make the case that there's only so much Obama can do; he can't swim the depths and plug the hole himself; he can't wave his hands and clean the beaches or save the wetlands.
But nobody is asking him to.  What we want is a leader.  Someone to inspire and lead us to the solution.  What we're getting is the opposite:

Instead of an uplifting message of unity rallying the country to confront the horror and assuring all Americans that we will deal successfully, one way or another, with its disastrous effects, the nation is treated to petty lecturing of BP — even a refusal to let BP evildoers sully the stage the administration uses to discuss the latest failures.


Koffler points to Bush grabbing the bullhorn at ground zero to make the case that a true leader has passion.  He uses Churchill and Roosevelt as examples. Leaders.

But sadly, what we have is partisan sniping from the White House intent on pushing through the progressive agenda and using any crisis to get it done.

The fact is, the American people are beginning to see this and are tired of the Blame Bush game, the self-serving arrogance, the cold, aloofness that we get from Obama.  As one crisis after another gets piled onto Obama's plate, his meltdown picks up tempo.  The arrogance intensifies, the temper gets shorter, the sniping gets louder.

It's a tough job.

We tried to warn you liberals that he couldn't handle it.  His only hope was to pick a cabinet and a team with the experience and wisdom to guide him.

He couldn't even do that.

And the nation pays the price.

Great post! I agree and have zero sympathy for BO, zero. If I feel sorry for anyone, it's we who must suffer this fool until January 2013.

I've thought, too, about the contrast between President Bush's response to 9/11, a speech that literally made me cry with gratitude and relief that we had a real leader who would protect us, who knew what he was doing, and BO's always too late, always too little, always shifting blame and responsibility limp and flaccid responses to everything, including real crises. He's a complete disgrace to this entire nation, and I can't wait to see the back of him in 2013.