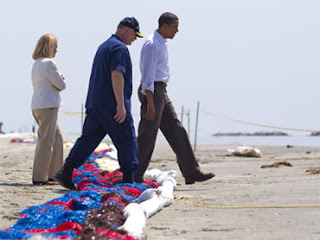 Carol Browner, director of the White House Office of Energy and Climate Change Policy, told Obama at one of the earliest briefings in late April that the blowout would likely lead to an unprecedented environmental disaster, senior White House aides told The Daily Beast. Browner warned that capping a well at such depths had never been done before, and that they ought to expect an oil spill that would continue until a relief well was drilled in August, the aide said.

Obama has known from Day One how bad this oil spill would be and how devastatingly detrimental to the Gulf Coast it would be.

More specifically, he was briefed and told to prepare for the fact that this spill would likely spew until August.

On the other hand, if he really is powerless to do anything because the feds simply don’t have the expertise to cap a well the way BP does, what was he supposed to have done after Browner briefed him?

Yes, he could have given a national address warning the public how bad it would be, but AP is right - the political backlash would be something he would make every effort to avoid.

No, Allahpundit goes on to say,

The real disgrace here is why, if he really did know right away that this was the oil equivalent of an asteroid strike, he didn’t scramble some sort of all-hands-on-deck emergency operation to protect the coastline. Remember, Jindal reportedly requested five million feet of hard boom back on May 2, long after Obama (according to Wolffe) knew about the magnitude of the disaster. By May 24, not even 800,000 feet had arrived. What happened?

What happened?  The golf course beckoned at least seven times, and hiking in the mountains, and Paul McCartney lobbing cheap shots at Bush while a guest in the White House, and date night, parties, fundraisers ...:

A reader at Instapundit suggests that Obama's lack of concern might be *gasp* political in nature:

I hate to be a cynic, but have you looked at how the affected states have voted? How many of them did Obama carry? Also, at least 3 of the 4 governors are Republicans, although Charlie Crist is questionable.

I bet if it was California it would be all hands on deck from day 1.

To which Professor Reynolds replies:

As bad as the pictures of oil covered pelicans are, this is only going to get worse.  What in the world could be an acceptable explanation from Obama for failing to do everything in the federal government's power to help protect the Gulf coastline and Louisiana wetlands when he has known from Day One how bad it's going to be?

Answer?  There is none.

He may not have the power to part the waters and smite the leaking hole in the ocean closed, but he does have the resources and power at his disposal to marshal all hands on deck to the coast and get those berms built, get the booms in place, and get the clean up going.  Governor Bobby Jindal has been begging for these resources for weeks.

Jindal is losing patience with BP, too:

NOLA reports that finally, FINALLY St. Bernard Parish has received 28 miles of hard boom from BP to protect its shores:

Until Thursday, the parish had taken delivery of 200,000 feet of soft boom to absorb oil sheen but had been told by BP that the 150,000 feet of requested hard boom was not on hand and no delivery date could be guaranteed, according to reports posted on the state's Web Emergency Operations Center system.

This is where, it seems to me, Obama should be concentrating his efforts, rather than on the golf course.  He could have done something to see to it that St. Bernard had that layer of protection when they asked for it.  The answer "not available" from BP is not acceptable and if Team Obama really does have its "boot on the neck" of BP, that boom should have already been in St. Bernard parish.

They've known since April that this spill would be a devastating environmental disaster and Team Obama did what, exactly?  Besides a photo op of Obama poking his finger in the sand?

Are we still wondering if it's "Obama's Katrina"?  I'm not.

(More on the non-response at Memeorandum)
Posted by Pat Austin Becker at 11:18 AM

It's clearly not barack hussein obama's Katrina and here's why: The mainstream media (some refer to it cynically as the state-run media) won't make it such.

This is a problem that could have been mitigated far more successfully IF anyone had cared. The impacted states did not vote for barack hussein obama and mitigation would not have done much to earn him either personal money in the way of kickbacks or votes.

For the most part, the impacted states fall under the area disdained by the obama regime as "those people who senselessly cling to God and guns".

Since it won't be reflected in the polls and the press doesn't care much, why shouldn't obama shoot hoops, play golf and ignore the problem?

There are several things in the crisis that concern me. First, our government is so tied in knots that they can not take an action within a short period of time or do anything without consulting numerous agencies. As president, Obama should have cut this red tape. For the governor of our state to have to beg to do simple sand dykes is beyond belief. The fact that he does not have the authority to do something for his own state makes me wonder what country I am living in.

The second issue is the blame game that the president is playing with BP. BP did not intentionally cause this problem. There seems to be some controversy over the blow out preventer, but that is a concern for next year, not now. The hostility that The One has shown to this company is spilling over into violence against the company. That is obviously Obama's fault. As a leader, his job is to put oil on the troubled water (sorry), not to inflame the problem. He does no look tough by saying he is going to put a boot on their neck, only foolish.

Finally, how can you make a problem like this worse? You do exactly what Obama is doing by curtailing drilling. Some have extimated that gas will be 6 dollars or more as a result of his actions. He should be calling for more exploration in safer waters. We have to have oil. Our economy can not do without the substance. His "green" efforts all require oil and are really useless.

Obama has consistently proven that he is the wrong man at the wrong time. All I can forsee is worsening of our economy and likely WWIII.

Exactly - we have to have oil.

Not only should he allow continued drilling but he ought to allow drilling in ANWR; I blame the eco-freaky libs for part of this. What were we doing in 5,000 ft. of water anyway???

There are plenty of safer places to drill right here in the continental US besides 5,000 feet deep out in the Gulf of Mexico.