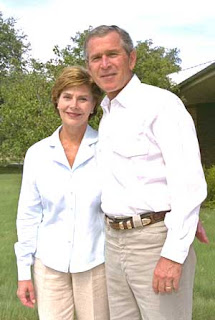 In a refreshingly honest speech yesterday, sure to drive liberals over the edge, George W. Bush forthrightly declares "YES!" we waterboarded KSM, "YES!" it was the right thing to do, and "YES" he'd do it again.

"Yeah, we water-boarded Khalid Sheikh Mohammed," Bush said of the terrorist who master-minded the Sept. 11, 2001 attacks on New York and Washington. He said that event shaped his presidency and convinced him the nation was in a war against terror.  "I'd do it again to save lives."

Jennifer Rubin sums it up best:

Emotional. Direct. Morally unambiguous. Deeply loyal to allies. A true friend of  Israel. A clear-eyed understanding of the enemy we face. Yes, Obama is the un-Bush, and the U.S., the West, and Israel are the worse for it.

Meanwhile, we have The Keystone Cops.

And note Bush's restraint in criticizing the man who criticizes him at every single opportunity:

But he also made it clear he would leave political potshots at President Barack Obama to others, saying: "You are not going to see me in the public square criticizing the president."

More at Memeorandum.
Posted by Pat Austin Becker at 12:56 PM

That's W: keeping it classy. Oh, and that's a nice portrait too. That is what a President and First Lady are supposed to look like: Classy and proud to be American.

Oh. I miss him, too. It seems so long ago that I felt safe in my own country, a thing I see now that I took for granted. This man is a real leader, a good and decent man, and a true American.

I miss the way he protected us from the terrorists on and before 9/11. Thank God we had George Bush during that time, so that not one single American died that day! Yup, he kept us safe!

I miss the way he protected us from the terrorists on and before 9/11. Thank God we had George Bush during that time, so that not one single American died that day!

Josie, you can thank Clinton for that. He, like this sham of a president, treated the FIRST attack on the World Trade Center like a "crime" rather than like the act of war that it was, that its perpetrators called it. Because of this, nothing was done, nothing put in place to ensure that such things never happened again. Yep, those dems are real winners.

Fuzzy, well I guess some people blame Clinton for everything. Perhaps that's your version of "leadership". Surely it must have been Clinton that made Bush ignore all the warning signs including that Aug 6 PDB that warned of an imminent attack, mentioned hijacked planes and NYC, etc.

@ Josie. "Fuzzy, well I guess some people blame Clinton for everything."
roflmao . . . I suppose the irony of this statement completely eludes you.

Let's see, what is President Bush responsible for, according to the lunatic left? 9/11, the economy (a lot of that actually IS Clinton, but let's not get confused by the facts or anything), the BP oil spill (that's BO's baby), Islamic jihad against America (oddly, this began against us long before he was president, we were attacked on our soil in 1996--when Clinton was president, and at many overseas embassies, military bases/ships, etc.), the rising cost of health care, the unemployment rate, and OH! Al and Tipper Gore's divorce. I'm sure I've left some things out, like poverty, greed, racism, and lust. roflmao, you are absolutely hilarious!! Thanks for the giggles.